In an effort to maintain a vibrant appearance around the Telfair neighborhood, Fort Bend County Levee Improvement District No. 17 (LID 17) has approved a major landscape enhancement project.

This project is divided into two phases, which are expected to take place concurrently. Phase 1 work started on May 23 and Phase 2 work is set to start on June 6. This project will include the removal of freeze damaged, dead, and dying plant material and then the re-establishment of the turf and landscape bed areas with freeze and drought tolerant plantings. Landscaping that was impacted during brick fence replacement project will also be replaced. Where necessary, landscape beds will be modified to adjust to site and shade conditions that have evolved overtime as shrubs and trees have matured. Plant materials that are expected to be used in these projects include dwarf loropetalum, knockout roses, wax myrtles, and big blue liriope. Irrigation repairs and modifications will also be performed as needed.

The cost estimate for these phases is $438,000 and they are expected to take approximately 60 days to complete. You should expect to see multiple contractors working in the community.

Phase 1 will focus on the following areas, generally following the Phase 1 brick fence repair/replacement project that was completed in 2021:

Phase 2 will focus on the following high visibility areas of the neighborhood that suffered damage during the February 2021 freeze:

LID 17 knows that the residents of Telfair are anxious to have a beautiful community and that other areas are also in need of landscaping work. More than 160 trees have been removed and more than 900 trees have been pruned this year. Following the tree work, new sod has been or is being installed. The District has also paid for installation of new plant material by Silversand in various areas owned by LID 17, in addition to paying 66% of the cost of monthly routine maintenance performed by Silversand throughout Telfair.

LID 17 is committed to strengthening the community by having a healthy and beautiful landscape. Project updates will be posted to the District’s website regularly as the project progresses, so check back often for the latest information on the landscaping projects.

The Board of Directors of LID 17 appreciate your interest in the overall appearance of our community.

The map below shows a visual representation of where Phases 1 and 2 will be performed. 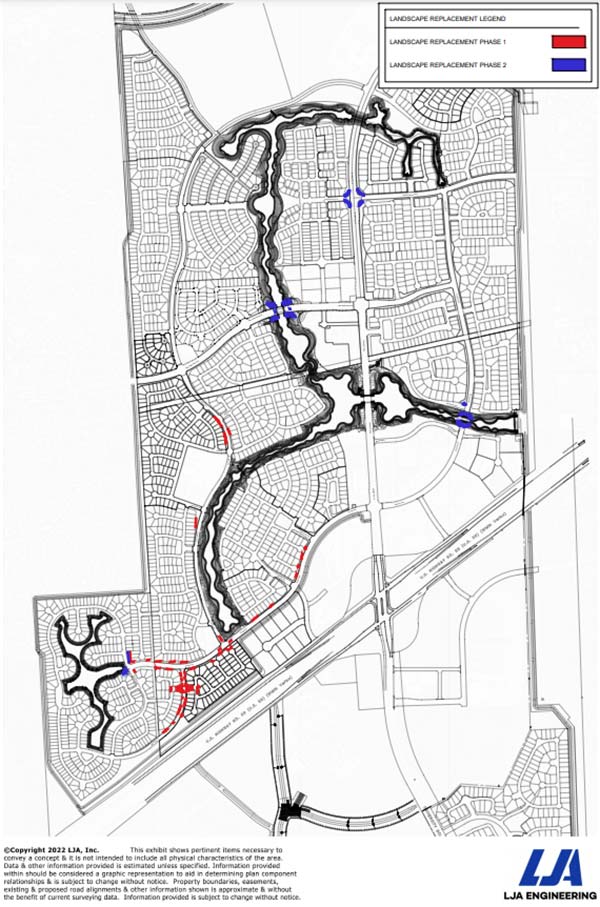 The drawings below were created by the District’s Landscape Architect and depict the scope of work for the areas included in Phase 2.