Based on Thursday (12/6) morning’s forecast maps for precipitation, there could be between 3 to 6 inches of rainfall within Fort Bend County while the upper portions of the Brazos River watershed, especially the Brenham area, could see closer to 5 to 6 inches of rainfall. There is the possibility of isolated amounts of 8 to 10 inches. With these totals and the short duration, we have an increased risk of street ponding with local rises in our creeks and streams occurring Friday night. This is particularly the case in areas with a history of ponding and/or poor conveyance.

Currently the Brazos River in Richmond is at Gage 18.84 feet. The NWS West Gulf River Forecast Center (WGRFC) issued a forecast that shows the Brazos River rising to at least 40.6, approximately as high as it was last month. Future WGRFC forecasts could modify this based on actual rainfall amounts. 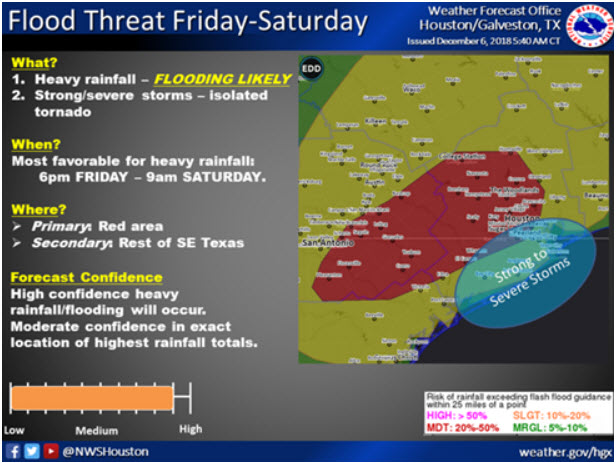 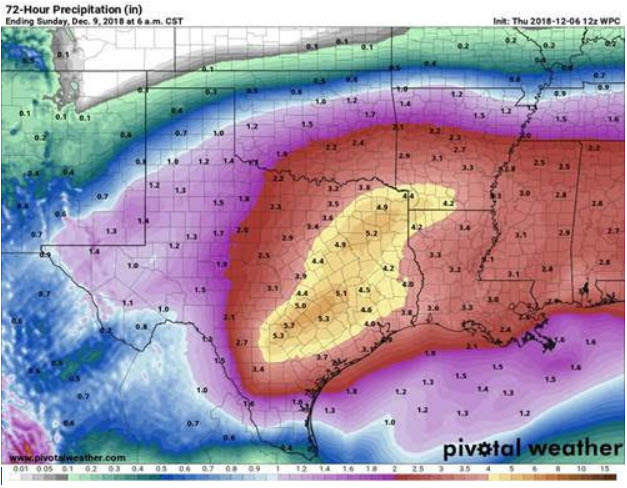 Below is the update from HCFCD on this weekend’s storms.

Flash Flooding of streets along with significant rises on area bayous, creeks, and rivers to flood levels is possible.

Powerful upper level storm system moving into S CA and NW MX this morning will track generally eastward and into TX over the next 48 hours. SW flow aloft is already spreading clouds across the area with currently best moisture return focused across SC/C TX where scattered showers have already developed. Activity will increase today from the coastal bend northward along the I-35 corridor where favorable moisture transport overlaps with short wave energy aloft. Some of this activity will likely affect our far western and southwestern counties this later this morning into the afternoon hours.

A surface cold front currently moving southward is now expected to reach our NW counties around College Station early Friday and then slowly move across SE TX during the day. This front will act as a strong lifting feature to promote widespread showers and thunderstorms within a very favorably moist air mass. In fact models continue to suggest near record/record moisture levels will be in place by Friday afternoon with PWS of 1.8-2.0 inches over much of the area. Forecast soundings show little instability, but loaded with plentiful moisture form the surface into the upper levels indicating convection will be very effective at heavy rainfall production. Unfortunately it appears the slow moving surface front will be nearing the US 59 corridor around the time that maximum parameters for heavy rainfall focus over SE TX. This includes a very strong 45-55kt low level jet which will transport copious moisture into the frontals slope. Additionally, winds aloft become increasing divergent helping to aid lift and vent near surface lift. Add in a slow moving surface boundary and a nearly “tropical air mass” and you pretty much have everything needed for excessive rainfall rates.

Widespread rainfall amounts of 3-6 inches appear likely over nearly all of the area with isolated totals of 8-10 inches. It is still somewhat uncertain where those higher isolated totals may occur, but areas along and NW of US 59 may have a slightly greater risk than areas S of US 59. Much of the higher totals will tend to focus closely with the surface front and where it slows at times as it crosses the region. In addition to the overall totals, high hourly rainfall rates of 2-3 inches per hour will be possible which will lead to rapid urban flooding of street systems.

Forecasted rainfall amounts and the widespread nature of the rainfall pattern strongly support significant rises on area watersheds. Think most basins can handle 6 hour totals of 3-4 inches, but anything greater than about 4 inches in 6 hours is going to likely be cause for concern. Creek, bayou, and river flooding will be possible especially in the San Jacinto, Trinity, and Brazos basins. For Harris County, all of the creeks and bayous will likely see significant rises and exceeding of flood stage levels is possible on some of the watersheds depending on exactly where the heaviest rains fall. Greatest concern at the moment is for the watersheds over the northern half of Harris County, but think all watersheds have about equal chances of seeing significant rises and possible flooding. Usual common flooding locations on Little Cypress Creek and lower South Mayde Creek will likely experience flooding. Some structure flooding will be possible if watersheds exceed their banks or intense rainfall rates overwhelm street systems.

Watersheds: flooding of creeks, bayous, and rivers is possible

Severe: a few storms late Friday night may become severe near the coast with a tornado threat. 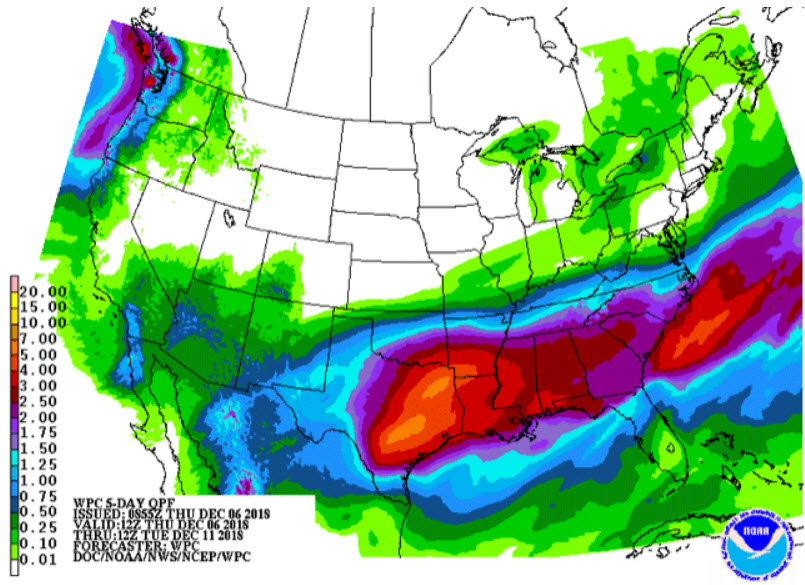 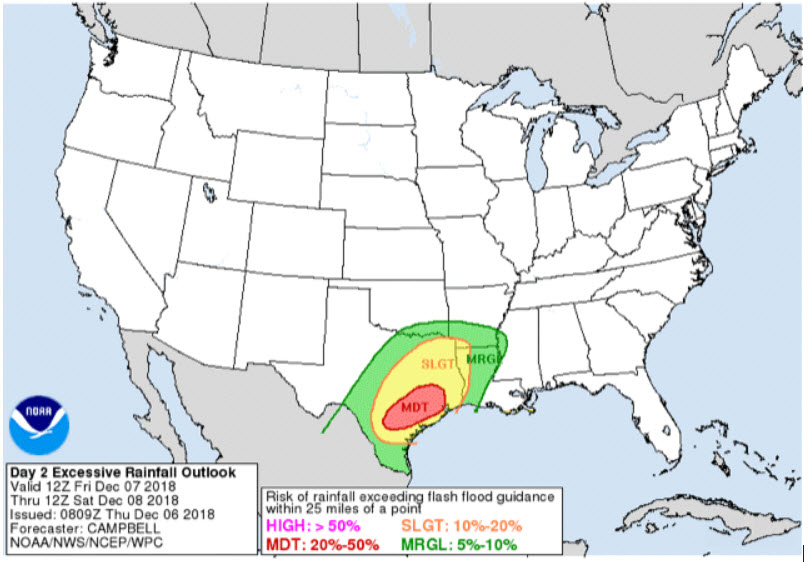 We received reports of structural flooding within the District. If your home and/or garage took on water during the rain event during the last 24 hours, please report it to the City of Sugar Land.

This is to report structural flooding only. Street ponding or flooded roads should report to the City via its website.